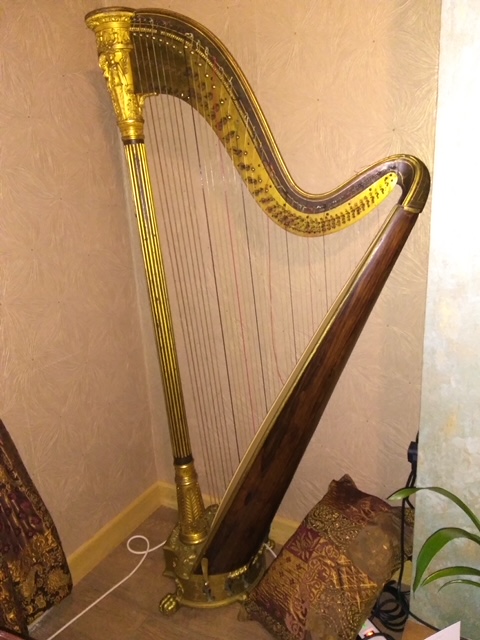 Marie Burns has played harp for International Food Fairs in Cologne, Paris and London, employed by IDB, representing N Ireland. She on many occasions played in Stormont Parliament Buildings, Queen’s University, Belfast City Hall. Along with Ursula, Harpbeat entertained President Bill Clinton during dinner in the Great Hall in QUB. Not to forget playing on several occasions for the Irish Football Association in Craigavon, Stormont and other venues. The theme tune “Match of the Day” went down well!

I have played for all of the Royal Family.. except Prince Andrew and Diana. I have played for Prince Charles on five occasions.. and enjoyed talking to him on three of those events.. one in Earlcourt, where N. Ireland was represented at that Fair.

Marie, using her maiden name O’Neill, in 1989, got permission from the Yeats family, Michael and Anne, to record an LP of W.B. Yeats poetry to her own music, using a wide variety of performers. It was runner up as album of the Year 1989, under auspices of BBC radio, Downtown and RTE folk awards. Marie has organised a number of Yeats concerts for Linenhall Library, Lyric Theatre and various summer festivals in Republic of Ireland. Marie wrote and performed most of Yeats plays under direction of Dr Louis Muinzer, of Delphic Players.

She also performed various National Trust venues.. including a week for Schools in The Argory. A friends wedding in Geneva and Lausanne was a particular delight… even when Madonna’s brother in law instructed me to get my nails done for the video shoot! So Marie is happy to meet and greet with harp.

We can provide the following types of music

Harpbeat can play all over N. Ireland

Harpbeat is the perfect accompaniment to your special event

Add a touch of sophistication to your event and treat your guests to the truly unforgettable experience of Harpbeats mesmerising tones.